The Friends of Oakdale Cemetery have a variety of special items for sale. Items are available at the Oakdale Cemetery Office, by downloading this Product Order Form, or you can call (910) 762-5682 for further information or email us at info@oakdalecemetery.com. 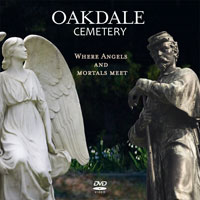 Oakdale Cemetery is among the earliest Rural cemeteries in the country. Authorities recognize Oakdale for its aesthetic richness and historic significance. Its diverse assemblage of monuments, statuary, and funerary art, as well as its fine collection of flora and fauna put it in the forefront of the state’s historic treasures. All of these aspects are featured in Oakdale Cemetery, Where Angles and Meet.

Donald Koonce, a native Wilmingtonian and owner of Ferncreek Creative, Greenville, SC, produced the documentary. Koonce is an award winning film and video producer who specializes in documentary work. He has produced and directed special documentaries for NASA, The Gettysburg National Battlefield Park, The National Air and Space Museum and numerous museums throughout the country. His production for the South Carolina State Museum, “Destiny’s People: Stories of South Carolina” was awarded an international CINE “Golden Eagle” by the Committee for International Nontheatrical Events.

Notecards are $10.00 for 8 cards and envelopes. Price includes shipping. 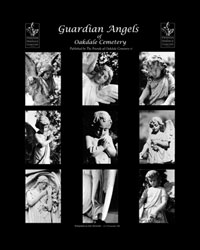