By the mid-nineteenth century, St. James churchyard and the town burial grounds were crowded. This, in part, led to concern over community health in Wilmington. Following the national trend, a group of citizens, organized as “The Proprietors of the Wilmington Cemetery,” acquired a 65-acre tract on the east side of Burnt Mill Creek east of the town limits. The property became known as Oakdale and was the first rural cemetery in the state, an appropriate achievement for the most populous town in North Carolina.

Oakdale is designed in the picturesque Victorian mode, associated with Rural Cemeteries. The designer was the surveyor, Louis C. Turner, who laid out sections A through H (click to view Cemetery Map). They were planned as a maze of curvilinear avenues winding through the hilly terrain with the drives depressed and the plots raised, often behind masonry walls. The site has much the appearance of a formal garden consisting of both the native and landscape vegetation. The iron fences and garden furniture scattered about enhance the garden aspect.

The first interment, February 5, 1855, was 6 year-old Annie DeRosset. Ironically, she was the daughter of physician Armand John DeRosset, the first president of the cemetery corporation.

The beauty and prestige of Oakdale led to a large-scale removal of bodies from other burial grounds and cemeteries. Some 80 graves were relocated from St. James and dozens from plantations, most occurring between 1856 and 1859, but some as late as 1923. Reinterments are responsible for markers that bear death dates well before Oakdale was created. If the old ones were not moved with the reintered graves, the markers can date from the time of reinterment.

John London’s 1811 ledger and the ledger types in the Dudley plot, are set on a brick or marble base to form a box-tomb or are supported on marble pillars to form a tomb-table. Some of the ledger stones have the willow tree motif and are signed “Gaddess, Balt.” They were cut coincidental with the reinterments, that is after 1855.

The residents used mid-nineteenth cemeteries as parks, places to stroll, enjoy nature and the company of friends. Such a custom goes back to ancient Egypt, where in Alexandria, tombs were a place where families gathered, picnicked, and socialized, in a way, keeping alive the shared memories of friends and family. This was also the era of brilliant white marble monuments, making a stark contrast to the lush vegetation.

In his Recollections, Rufus Bunnell, a Connecticut architectural draftsman who was employed by James F. Post during 1859 and 1860, wrote:

Friday. . . I took a drive out to Oakdale Cemetery, a cemetery laid out right in the pine forest, about teatime; but a good number of oaks and pretty underbrush among the oaks. An attractive stream bordered the woods on one side. I saw the place had great possibilities and I afterward made a sketch of the back entrance across a rustic bridge over the stream.

In 1900 Bunnell returned to Wilmington and commented on Oakdale, . . .it was really beautiful; monuments and extensive drives and walks beautifully shaded by noble trees. The entrance and chapel had been designed by Mr. Post, one of his last works before his death.

The buildings to which Bunnell refers were built in 1896 and remained in place until after the entrance was relocated from Miller Street to North 15th Street. Portions of the foundation walls remain and form the wall around a burial plot.

In 1867 by the cemetery corporation gave the Ladies Memorial Association a plot of land on which to place a monument to the Confederate dead. They enclosed it with an iron fence, and in 1872, unveiled the monument of a bronze statue of a Confederate soldier and medallion likenesses of Robert E. Lee and Thomas “Stonewall” Jackson. Mr. O’Donovan of Virginia designed the monument and Maurice J. Power at his National Art Foundry in New York, executed it. A North Carolina quarry furnished the granite pedestal. (Star, May 10, 1879.)

Oakdale has several specialized areas: the yellow fever section, with its few markers, dates from the epidemic of 1862; the enclosed Hebrew Cemetery, established in 1855; a Masonic section; at least one area reserved for Odd Fellows; and an area to which the burials at Front Street Methodist Church (congregation now known as Grace Methodist Church) were moved following the fire of 1886. There even is a plot set aside for individuals who have no other family. 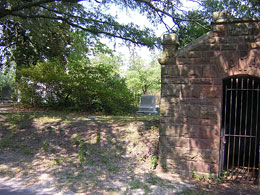 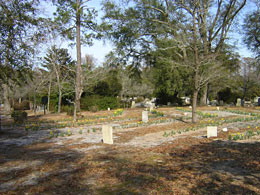 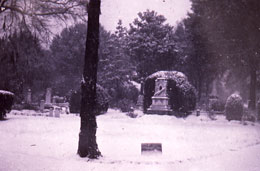 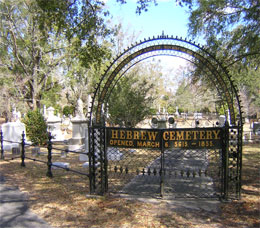 As sections were developed, the original 65 acres were completely sold by World War II. Those sections followed the basic picturesque scheme of raised plots and depressed drives of the original cemetery, but on a strict grid plan.

The Annex Extension of 1945 and the Memorial Garden of 1950 increased the acreage to nearly 95 acres, but those additions lost the picturesque plan, conforming instead to the popular “lawn” type cemetery. They are grid plan areas, and in the Memorial Garden, head stones are prohibited all together in favor of in-ground bronze plaques.

A brand new section named the “Live Oak Section” has been created in a section just east of the entrance and reuses the gateposts from the old, closed entrance created in 1896 by James F. Post. While a grid plan on level topography, the section does allow above-grade markers.